Celebrations in Honour of the
300th Anniversary
of Nicolas Choquet's Arrival.

In 1965, Elisée Choquet took advantage of his position as parish priest in Varennes to orchestrate the celebrations of Nicolas Choquet-dit-Champagne's arrival in New France. He invested time and effort to contact hundreds of Choquet and Choquette's throughout North America to invite them to the feast and collate genealogical data. The monument, which was unveiled during the ceremonies, was designed by this priest.

The Elisée Choquet Fund left documents, letters, newspaper articles and photos related to the celebrations with the Quebec National Archives in Montreal... a real gold mine for all those interested in the Choquet-te family history. The following are excerpts from these items. Click on the photos to obtain an enlargement.

300th Anniversary of the Choquette Families
What a Feast in Varennes 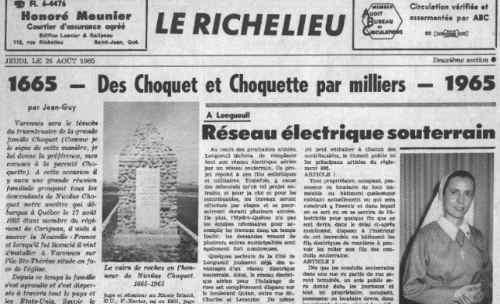 In response to Father Elisée Choquet, the Choquet and Choquette's gathered from all over to meet and greet each other and celebrate. This year marks the 300th anniversary of Nicolas Choquet's, soldier in the Carignan Regiment, arrival in Québec, more precisely on 17 August 1665. Following his military career in New France, he adopted Varennes as his preferred location and settled there. The Choquette's came from all over the world: Guy Choquet, a priest (abbé), brought greetings from Amiens, France, on behalf of French cousins overseas; other Choquette's from California, Florida and New England, headed by Maj Gen Wallace A. Choquette; from Haiti, Mgr Maurice Choquet; from Ottawa, Senator Lionel Choquette; and a judge from Québec, the Honourable Marguerite Choquette.

Others joind via telegrams. The Honourable Fernand Choquette, a judge with the Queen's Bench, whose medical condition prevented him from attending in person; the former Mother superior from Precious-Blood, who wasn't permitted to attend in person; a number of professionals who were attending conventions at the same time; two Canadian General Consulates, Mr. Guy from Bordeaux, France, and Robert Choquette, poet and writer. The latter forwarded some of his poetry for the occasion. 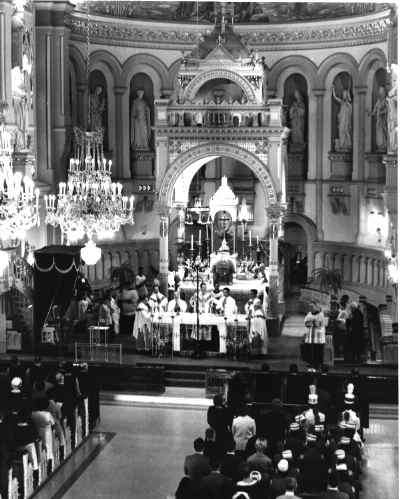 There were seven men of the robe at the altar. Five of them were Choquet's: His Excellency and two other priests of Ste-Croix, Jacques (father superior in Rome) and Robert (from Ste-Geneviève), father Claude, Trinitarian, and the parish priest. Two others were descendants of Nicolas' maternal side: "Chanoine" A. Beauregard and parish priest Irénée Jetté.

Mgr Maurice Choquet took it upon himself to show that Nicolas Choquet followed "S. Joseph Le Travailleur"'s example in that he incarnated duty and commitment to work. He shared his fellow colonists's objective: to spread God's kingdom in America.

(See other photos of the Mass) 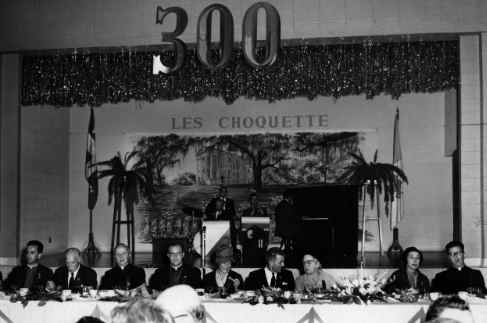 Many a guest signed the registry by the painting of Varennes' foundation following the visit to Mère d'Youville's sanctuary and the veneration of relics from Varennes' well-known daughter.

The school gymnasium was decorated with flowers and a great big "300" of blue and gold. Robert Choquette directed the orchestra. An outstanding banquet was served by René Borduas, a family linked many time to the Choquette's. Armand Villeneuve led special songs in honour of the organizers; all joined-in happily. Mr. Germain Gaudreau and his lovely wife, Pierrette Lachance were among the gentle targets of these songs. As a matter of fact, the music also honoured various delegates from the United States and Canada respectively.

Senator Lionel Choquette recommended genealogy as a tool to tighten family ties and get to know relatives. To drive his point across, he raised examples of Choquette's who had contributed to the national, religious and artistic scenes.

(See other text and photos of the Banquet) 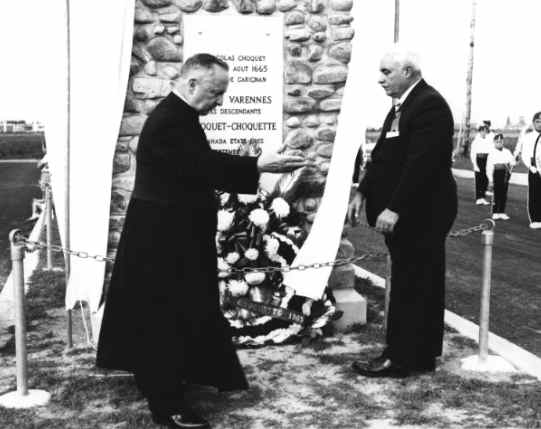 People paraded along Nicolas Choquet street to the monument: a five foot square base with a pointed roof totalling eleven feet. Two flags are mounted at the base: those of Quebec and Canada. At the ceremony, Mr. Mayor Guy de Grosbois diplomatically alluded to our family's contribution to the prosperity of Varennes. To top it all, Gilbert Choquette, author and poet, read one of Mr. Robert Choquette's poems.

The Honourable Marguerite Choquette unveiled the monument. A moment of silent and prayer for a person deceased that day and ancestors who had passed on followed. The senator and parish priest brought flowers to the monument. Mr. Auguste Choquette, Member of the House for Lotbinière County, gave a speech honouring the present, past and future.

(See other text and photos on the monument)

Ideal setting. Perfect weather. Panorama: Montreal and the Islands. Bus tour to the sites and monuments, old and new. And then, various groups... quite colourful: the Knights of Columbus, firemen, Isabella's Daughters, parades and musicians. The clicking sound of kodaks. A unanimous wish: See you next year!