Notes on the Regiment de Carignan-Salieres 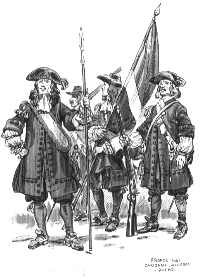 "In 1642, Thomas-Francois Savoie, Prince of Carignan, placed the Regiment under Henri de Chastelard's (Marquis of Salieres) authority. In 1665, the regiment was sent to New France to fight the Iroquois who were harassing the French settlers. In 1668, it was disbanded; 400 or its 1100 men and officers who had undergone the voyage decided to stay in New France and were permitted to settle on Montreal's south shore and along the Richelieu river, thereby reinforcing the colony's defense and military intelligence. The term "Carignan" stems from "Carignano", an Italian city located in the province of Turin."

"One day, at a meeting with Mgr de Laval in Versailles, Louis XIV promised him to send each year some three hundred men to New-France.

A regiment, from the Royal Army, that had taken part in every battle for the monarchy , in the last twenty years and had covered itself with glory while fighting the Turks."

It was the Regiment de Carignan, that received the order to go to Brouage or la Rochelle and be ready to embark for New-France. During the month of April 1665, the first four companies set sail towards Quebec.

The Regiment de Carignan was raised in 1642 by Thomas-Francois de Savoie, Prince of Carignan. Unfortunately, fourteen years later, due to a lack of funds, Prince Thomas was forced to hand over his Regiment to the authorities of France. The name became Carignan-Salieres. According to Jean Cournoyer (le petit Jean)'s Dictionnary, Carignan is the French equivalent of Carignano, a town in the province of Turin in Italy. It is not surprising, because this involves a Savoyard (a person from Savoie)"

Message from Gianfranco Accattino on January 25th, 1995 in the soc.french.genealogy newsgroup.

Here inTorino (Turin), there is an historic building named "Palazzo Carignano" (Palace of Carignan). Carignano is a town in Piemont and also the name of a branch of the Ducal House (and eventually Royal House) of Savoie. This Palace is very important in Italy's history, having housed the first Parlement of the State in 1861. Palazzo Carignano was built in 1679 by the architect Guarini by order of Prince Thomas. On the windows of the palace, Guarini planned to have engraved many stylized images of a human face with feathers on its head, to commemorate the Indians of Canada fought by the Regiment de Carignan-Salieres in the XVII century. The Regiment de Carignan (RC) was sent to Quebec in 1665 from the port of La Rochelle. When the Regiment was called back to France in 1666, more than 400 soldiers and officers chose to settle in Quebec.

Back to Biographical Notes