It's fascinating to discover, merely through an Internet search for instance, that a large number of Choquette's live all across the United States. As our research progresses, and American pen pals write to us, we are in a position to re-capture the road travelled by some of the American pioneers.

From Marieville, Quebec to Garden, Michigan and Campbell, Nebraska.

Thanks to Internet correspondence, between Leila Belkora, of Napierville, Illinois, and Mary Kusterer, of Pincoming, Michigan, and ourselves, and Ms. Lee Jones's data, (from Sign Lane, Utah), we are in a position to re-create migration patterns that explain the presence of many Choquette's in the United States today.

Joseph Choquet and Marie Céleste Decelles, wed on 5 November 1810 in Varennes, Quebec had 16 children (of course you realize there was no T.V. at the time!!!), of whom at least 3 (Charles, Joseph and Damase, all married in Marieville) emigrated to the United States. They left a considerable number of descendants (consult the partial family tree):

Charles Choquette and Eléonore Séguin were married on 8 November 1836 in Marieville. We believe the family then moved to Worcester, Massachussets and lived there between 1863 and 1868. From 1868 to 1872, the family lived in Kankakee, Illinois. 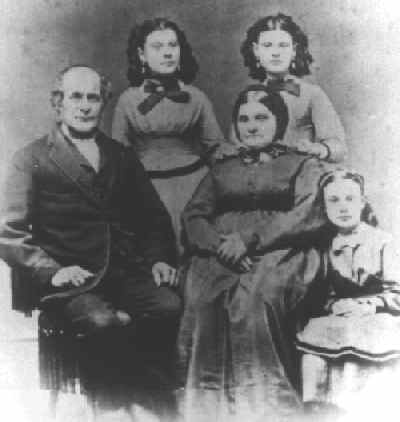 Following that period, the family moved to Ishpeming, Upper Michigan. Charles and Eléonore finally settled in the village of Garden, Michigan, around 1880. Seven of their children settled in the vicinity. Two other sons went further West to Oregon and Seattle, Washington State.

In Garden, Michigan, the Choquette's lived in a neighbourhood called "French Town" ( I wonder why!!!). Joseph, one of the sons, was a "street commissionner". Charles junior, you guessed it, another son, was a farmer. Some then moved to Negaunee and Manistique, Michigan. The Garden peninsula is home to many Choquette's. Our helper, Mary Lysaght-Kusterer, is married to one of Charles and Eléonore's great-great-grand-son.

Joseph Choquette, who married Marie Desanges Poulin on 16 February 1841 in Marieville (See their photo album). Around 1874, Joseph junior decided to emigrate to the States. Woonsocket, R.I. was his location of choice. The family then moved to Campbell, Nebraska (Two sons, Henri and Alfred stayed behind in Woonsocket, and Henri later came back to Mont St-Grégoire - See his story and photo album). Joseph and Marie-Desanges' descendants are still in Woonsocket, and in California and Utah. Beulah Lee Choquet-Jones, who is actively involved in the Choquette genealogy is their great-great-grand-daughter.

Damase Choquette was the third of Joseph Choquet and Marie Céleste Decelles' sons to move to the States after his wedding to Agathe Poulin on 17 September 1849 in Marieville. He too chose Campbell, Nebraska around 1885. Damase and Agathe left many descendants. Their grand-children and great-grand children are still in Campbell Nebraska today, in Merce California, and in Colorado. Our helper, Leila Chevalier Belkora great-great-grand-daughter.

The above stories attempt to explain the logic behind the presence of many Choquette's across the United States, far from Marieville, Quebec, Canada. Have a look at the family tree to visualize it better...