When a genealogy fanatic encounters, through Facebook, a fanatic of war scenes reconstruction, it gives the meeting of Andrée Choquette and Jonathan Leo, from Caen, France. While traveling through the Normandy American Cemetery in Colleville-sur-mer, Walter Leo Choquette's tombstone caught Jonathan's attention because of Walter's middle name, which was the same as his own last name.

Jonathan was so touched by the tragic story of Walter Leo that he posted a Facebook page (in french) that contains a wealth of information. Here is a summary. 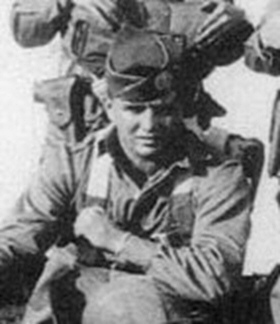 Walter Leo Choquette was born in 1921 in the United States, in the state of Montana. Before the Second World War, he worked in the entertainment industry. He is the second of three sons of Eugene Rock Choquette from Nebraska and Gladys Alice Riley from Montana.

The 1930 census in Silver Bow County shows that Walter lives with his parents at 155 West Clalin Street, in the town of Butte, Montana. Walter joined the army on March 4, 1942 in Missoula, Montana. He will then train with the regiment until his departure for the European front.

On June 6, 1944, D-Day, the invasion of Normandy, he will be placed on the aircraft bearing the number 42-92066 of 53 Squadron, bearing the code 3A on the nose. Walter is in 14th position on a group of 17 paratroopers, plus 4 crew members. Various containers loaded with weapons and rations are placed under the aircraft.

Upon his arrival on the Cotentin Peninsula, Walter's plane and other aircrafts following the formation were diverted and dropped 30 km from their planned arrival point. He and his colleagues land in the swamps of Graignes. Walter would have injured his ankle, according to one of his comrades. He will be executed on 13 June 1944 by the troops of the 17th SS Ostendhorf with a bullet behind his head, after being forced to dig his own grave in the company of some of his comrades. His body will be later exhumed and transported to the Normandy American Cemetery in Colleville-sur-mer, where he rests in peace with his brothers in arms.

To learn more about the Battle of Graignes, click here.