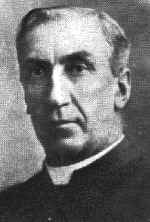 Joseph-Eugene Choquette, son of Joseph-Edouard Choquette and Virginie Foisy, was born on April 20th, 1858 in Saint-Mathias, Rouville County. Ordained Priest December 4th,1881 in Farnham, he became Parish Priest of St-Agnes du Lac Megantic. A rather original person, as we can tell by the following:

"The population of Sainte-Agnes du Lac Megantic rendered, on September 17th, the supreme and last hommage to their vicar, Father Eugene Choquette. He died in a Sherbrooke Hospital during a routine. The burial ceremonies were impressive. Our Seigneurs LaRocque and Chalifoux presided the sorrowful ceremony. (...)

Father Choquette was a notable person because of his personal qualities and his general conduct; illustrious because of his apostolical zeal and because of his deeds, clergical and social; famous because of a particular and very rare characteristic that made him the most original vicar of the Eastern Townships and possibly of all America. (...)

The Parochial Religious Service leaving him some leisure time, he devoted himself to the practice of experiments and amusement feats that had been his passion from an early age. It was in Compton, as the legend goes, that M. Choquette attempted his first public experiment which had an unexpected result. Having acquired a mechanical piano - which was then a novelty - and wishing to please his parishioners, he announced a grand sacred concert and invited the whole population of Compton. At the designated hour, M. Choquette, his back to the audience, started to draw from his piano harmonies of the most beautiful effect. "But our Priest is a great musician, some of the parishioners were saying to each other, we were totaly ignorant of this fact" Everything was going fine and without interruption, when an English Lady, no doubt fascinated by the impeccable play of the artist, approched the balustrade and looked over the instrument. "Ah! that's a machine!" she cried out and, furious, she immediately left the church followed by the majority of the audience. (...)"

Vicar Choquette had built the new Megantic church "one of the most beautiful and the largest gothic monument in our Province." He conducted a temperance campain and had a dozen bars closed.

"He was known, in Montreal and in Quebec City, in the clergy and among the secular people, among the English as well as with our compatriots, as a most universal and adept non-professional scientist. It is of these things that we have wished to write in La Revue canadienne. (...)

During the period of his last vacation as a student (1876-1880), at the begining of the period of the great modern inventions, he built some telephones and some microphones, rather primitive at first, but he perfected them slowly but surely until the instruments were fully functional. (...)

As vicar of Compton, he attached a dynamo to a wind mill, installed batteries and built his own personal electric lighting system. He thus preceeded by thirty years the companies that today offer small lighting kits for private households. In Megantic, his ambition developped into the construction of a generating plant destined to the lighting of the whole town. He personally supervised the start of the installation. He continued, until his death, to direct the operation of the equipments, in the plant, in the streets and up to the top of the poles! The parishioners viewed, not without astonishement, their vicar, strapped twenty five feet in the air, getting ready to repair a defective transformer with the same resolve he would deliver from the pulpit to correct disorders of another kind.

Vicar Choquette was also a photographer and he excelled particularly in this art. (...) He "snapped" landscapes, groups, individuals, street scenes, interiors, at his home and that of others, often without their knowledge and despite formal refusal of the interested parties. From these improvised vignettes, and from the most daring ones, he would develop transparencies, sometimes caricatures, that would become the most acclaimed and successful high spots of his magic lantern shows.

In stretching a wet negative he was able to alter the normal size hat of a rather short colleague into a top hat of equal height to that of the wearer and projected the image on screen during a solemn magic lantern show!(...)

Some blackguards proclaimed that, in every physician, there is a dormant mystic. We take the liberty of writing, while still professing our great reverence for his person, that vicar Choquette would enjoy confirming this crank. He loved to mystify, to startle, to bewilder. He considered that, simply having fun and amusing his friends! (...) He would do card tricks with great skill. From exercices in patience, to boxes with secret locks, the Columbus Egg Trick, he owned them all and he would derive great pleasure from them.

What would be less entertaining would be the electric shocks that he would administer, in days of old, to anyone and everyone, with such abandon that his closest friends would not enter his home without being apprehensive. For a long time in his home, while he was young, a hammer or the door handle, even chairs would be connected to a powerful electrical coil that he would cunningly control remotely with the aid of a contact button hidden under the carpet. Visitors, who had escaped the trick door handle, rarely escaped the booby-trapped chair! Then M. Choquette would laugh, laugh with such whole heartedness, that the unfortunate candidate would end-up laughing also and would delight in imagining the contorsions of the next person to sit on the rigged chair. At a table, another secret button would trigger some kind of mechanical piano whose sound would appear to come from the street and would continue to play, with different tunes, during the whole meal. One day, a visitor, having apparently appreciated this music, discretely searched in vain in the street for the determined organ-grinder in order to give him a coin.

He bequeathed his library, his physics apparatus, his music instruments, his photographic and phonographic collections, to the houses of learning dearest to him: the Sherbrooke and Saint-Hyacinthe Seminaries, to the Convent and College of Megantic. (...) He established two Student Scholarships at Sherbrooke's Seminary. The balance of his estate, except for minor bequeaths to member of his family, was awarded to the Bishop of Sherbrooke."