Joseph, the First Choquet
South of the Border ?

Thanks to one of our contributors, Patricia Weeks, from Dana Point, California, we have traced the whereabouts of whom we think could be the very first Choquet to emigrate south of the border, in what would later be the United States of America: Joseph Choquet, son of Julien Choquet and Françoise Daudelin, and grandson of Nicolas, the ancestor. By analyzing the data that Pat Weeks gracefully sent us, we have tried to write his story. Keep in mind though that most of the time, we have extrapolated.

From Varennes to Kaskaskia, Illinois Country.

Joseph was born in Varennes, Quebec, in 1719. In 1747, he was married to Marie-Rose De Guire, in the village of Kaskaskia. Patricia gives us some information about this village, located in the area known as Illinois Country:

"After LaSalle, and Marquet, and Tonti, in 1702 Father Marest chose the Indian village of Kaskaskia to establish his mission among the Illinois tribes. Kas is on the east side of the Mississippi, in the present state of Illinois, about 60 miles south of St Louis MO. One reason he chose it was there were already some Frenchmen living among the Indians at that spot. Kaskaskia, also referred to as "the establishment" or shortened to "Kas", was that spot to seek refuge while traveling to deliver furs or make contact with Biloxi, the Gulf of Mexico French outpost."

The establishment of Fort de Chartres and Ste. Genevieve

Joseph Choquet and Marie-Rose De Guire probably moved to Fort de Chartres shorthly thereafter, because that's where their first child, Marie-Josephe, was born in 1748. Pat tells us more about this outpost: 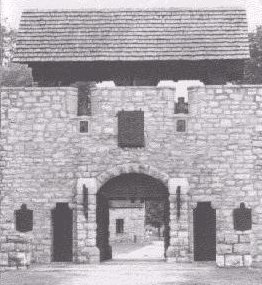 "By 1720, France became concerned with the Spanish invasion of this middle country, and the John Law group proceeded to fund more outposts. To establish a post for the soldiers who were stationed to protect the fur trade in the region, Fort de Chartres was built - it being about half way between Cahokia and Kaskaskia.

These little insignificant settlements grew and became very significant, for the French who settled there (and they were 90% French Canadian, not European French, or Acadian) developed a very profitable agrarian source, feeding the Gulf Coast, the mid US region, the Fr-Indian Wars effort with flour and also lead. The western coast of thc Mississippi established a settlement which was named Ste-Genevieve (now in the state of MO) of Frenchmen from Kas snd Ft De Chartres, etc. A delightful town, so picturesque and devoted to its French Canadian beginnings."

Joseph and Marie-Rose were probably among those who moved from Fort de Chartres to Ste. Genevieve, because their third child, Julian, was born there in 1755.

"Then, in l764, came LaClede and Chouteau, up from New Orleans (which was not settled until 1721) and chose the site across river from Cahokia to build their city of St Louis MO. France ceded her holdings to Spain, the "Amurikans" were closing in from the east, and the French habitants said, "lets get over the river where we can at least be governed by a Catholic country." So the majority moved to the west bank of the Mississippi, and Ste. Genevieve and St Louis grew."

That's exacly what happened, because Julian (4th generation of Choquet in North America) and his wife, Marie-Louise Boyer, had 11 children, who settled in the Ste. Genevieve/St. Louis area, in late 1700 and early 1800.

A long journey towards Louisiana...

Meanwhile, it seems that between 1755 and 1759, Joseph moved farther south, to Pointe Coupee, diocese of Baton Rouge, Louisiana. His first wife, Marie-Rose De Guire had died, and records show that he remarried to Marie Anne Decoux on May 15 1759. He died a few months later, and was buried in Pointe Coupee on December 26, 1759.

"Pointe Coupee, is in present day Louisiana,100 miles upriver from New Orleans, very near Baton Rouge. The main town is New Roads today. Established early 1720s, mainly agricultural, many Acadians settled there later on. Most early settlers were from France, brought over by the John Law Company as indentured servants. Some beautiful old plantation homes built by Frenchmen have survived in that region."

Since Pointe Coupee is definitely not next door to Ste. Genevieve, it would be really interesting to know what motivated Joseph to make such a journey...

On the Native Americans of the Illinois Country: