The last survivor of the "Bloc populaire"
has passed away.
J. Armand Choquette was the first of his party to be elected, in 1943 in Stanstead
by Gilles Dallaire 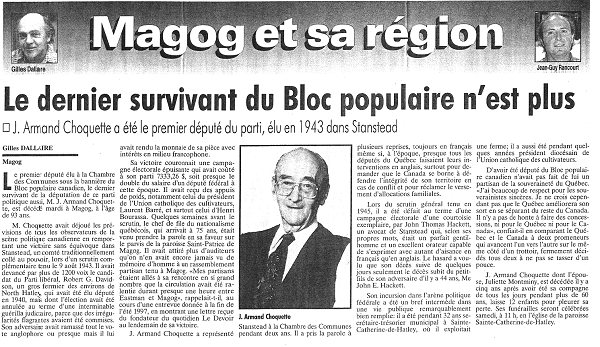 The first to be elected Member of Parliament under the banner of Le Bloc populaire, he was also the last surviving member of that political party. M. J. Armand Choquette died Tuesday in Magog, at the age of 93.

M. Choquette had foiled the predictions of all observers of the Canadian political scene when he had an unequivocal victory in Stanstead, a county traditionally close to the party in power, on the occasion of the by-election held on August 9th, 1943. He had surpassed by more than 1200 votes the candidate of the Liberal Party, Robert G. Davidson, a prosperous farmer from the North Hatley area, who had been elected MP in 1940, but whose election had been annulled at the end of an endless judicial saga, because flagrant irregularities had been committed. His opponent had picked up all of the anglophone vote or most of it but he paid him back in his own coin with interest in the francophone circles.

His victory crowned an exhausting electoral campaign that had cost his party $7333.25, which was almost twice the annual salary of a federal MP at the time. He had received some heavy support, notably that of the President of the Catholic Farmers Union, Laurent Barré, and especially that of Henri Bourassa. A few weeks before elections day, the leader of the Quebec Nationalist Movement, who was almost 75 years old, came to speak on his behalf on the steps of Saint-Patrice de Magog church. In living memory, he had attracted more listeners than had ever been seen at a political rally held in Magog. "My supporters had gone to meet him in such larger numbers that traffic had been slowed for almost an hour between Eastman and Magog", he remembered during an interview given at the end of summer 1997, showing a letter he had received from the founder of the daily newspaper Le Devoir after his victory.

J. Armand Choquette represented Stanstead in the House of Commons for two years. He spoke on several occasions, always in French although at the time almost all MP's from Quebec would intervene in English, especially when asking that Canada limit itself to defending the integrity of its territory in case of conflict and to call for the payment of family allowances.

On the occasion of the General elections held in 1945, he was defeated after an electoral campaign characterised by the exemplary courtesy shown by John Thomas Hackett, a lawyer from Stanstead who, as he had mentioned himself, was a perfect gentleman and an excellent orator, able to speak with equal ease in French as well as in English. As fate would have it, his death followed by a few days only, the sudden death of the grandson of his opponent of 44 years ago, Me John E. Hackett.

His incursion on the federal political scene was a brief interlude in a public life remarkably well filled: he was secretary-treasurer of the municipality of Sainte-Catherine-de-Hatley for 32 years, where he operated a farm; he also was for several years Diocesan President of the Catholic Farmers Union.

Having been an MP for Le Bloc populaire canadien did not make him a Quebec Sovereignist.. "I have respect for the sincere Sovereignist. However, I do not believe that Quebec will improve it's lot by separating from the rest of Canada. There is no shame in making concessions, neither for Quebec, nor for Canada", he mentioned in comparing Quebec and Canada to two strollers walking on the same side of the street, both firmly decided not to give an inch.

J. Armand Choquette whose wife, Juliette Montminy, died five years ago, his everyday companion for more than 60 years, leaves 12 children to morn him. His funeral will take place Saturday, at 11 AM, in Sainte-Catherine-de-Hatley church.