His enlistment form, signed on April 5, 1940 in Montreal, shows that he was born on February 13, 1918, in St-Paul-d'Abbotsford. He had tree brothers and three sisters, and his mother had already passed away, his father's name was Augustin CHOQUETTE. Georges was a carpenter and unmarried. He was promoted to the rank of Lance Corporal on July 16, 1942 and received a Good Conduct Badge on July 30, 1942.

In one of the numerous informations that Jim and Diane BAUER supplied us, one mentions the name of Boatswain Clarence CHOQUETTE, who died on May 4th, 1942 . His merchant ship, the S.S. Eastern Sword. was torpedoed and sank during World War II.

Here is a portion of a letter, Ron CHOQUETTE received from Gerald F. Holm, Provincial Toponymist of Manitoba.

More than 4000 lakes, rivers, creeks, etc., have been named after Manitoba's World War II casualties. This application of casualty names is a fitting memorial and affords society a means of recognizing the contribution which these brave Canadians made so we could live in peace and human dignity.

CHOQUETTE Bay was named on December 28, 1989, after Rifleman Morris J. CHOQUETTE, Reg. No. H 16015. The bay is located in Oolduywas Lake in Northern Manitoba.

Morris, from the community of Oakville, Manitoba, served with the Royal Winnipeg Rifles. He was killed on June 8, 1944, and is buried in the Beny-sur-Mer Canadian War Cemetery, France.

CHOQUETTE Lake was named on April 26, 1972, after Rifleman Edmund Joe CHOQUETTE, Reg. No. H 20691. The lake is located in Northern Manitoba.

Edmund, from the community of Glenora, Manitoba, served with the Royal Winnipeg Rifles. He was killed on October 28, 1944, and is buried in the Bretteville-sur-Laize Canadian War Cemetery, France. Edmund's brother, Thaddie, was also killed at war.

CHOQUETTE Point was named on December 28, 1989, after Rifleman Roland Joe CHOQUETTE, Reg. No. H 18201. The point is located in Northern Manitoba.

Roland from the community of Winnipeg, Manitoba, served with the Royal Winnipeg Rifles. He was killed on August 15, 1944, and is buried in the Bretteville-sur-Laize Canadian War Cemetery, France. 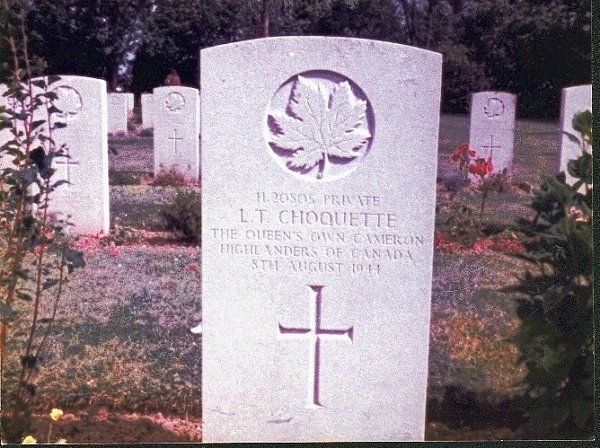 Mr. Rosco E. Long, from Saskatchewan, sent us this picture of Private L.T. Thaddie Ted Choquette's grave, killed on August 8, 1944 in France.  The picture was taken in 1984 at Bernieres-sur- Mer cemetery, in Normandy.