Henry W. Clark tells of the thrilling life story of Alexander Buck Choquette, an ancestor of the Choquette families, unknown until now, who consecrated his life in search of and of finding gold way before others did, the true pioneer of the Klondike. The original English document entitled Buck Choquette Stampeder© (153 stencilled leaflets) may be obtained at the Rasmuson Library at the Alaska University in Fairbanks or at the Wrangell Library in Alaska. 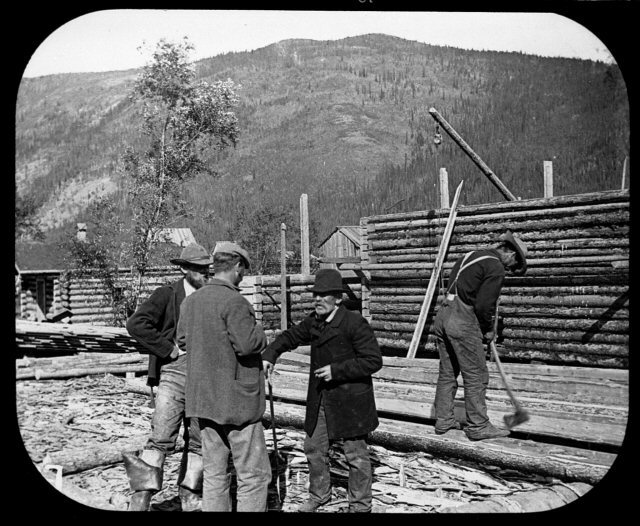 Alexander Buck Choquette is one of the most passionate people in the history of gold finding in the West.

Nothing has ever been humdrum in the life of Alexander Choquette. It is indeed by taking himself away from the ordinary daily Quebec rural ways of the nineteenth century that the young Alexander, in the hotheadedness of his youth, literally leaped into the adventure of his life, which will be made of courage and of energy of such courage.

A dramatic life story, which will lead him to chase from one gold stampede to another, for the fifty years that the said American stampedes lasted, be it from 1849 in California up to the Klondike in 1898.

Alexander Buck Choquette found much more than gold: he found a family, friends, a wonderful river, the Cassiar Region, the West and liberty. He went to the end of his quest, to the confines of his dreams.

He was born from a local middle-class family, son of Julien Choquet and Magdeleine Rastoule dit Vadeboncoeur.

What we learn from the story of the author, Henry W. Clark, is that he felt his village on foot on a morning in 1849, at the age of twenty, and that he first went to work in Montreal, before undertaking the trip that will lead him first of all to Winnipeg and then to Duluth in Minnesota to finally reach Independence in Missouri. Because indeed, that was where the numerous convoys of wagons would depart for California.

Once he reached the shores of the Sacramento, he began acquiring experience in the skill of prospecting amongst the hundreds, indeed the thousands of gold washers who would literally step on each others foot and who have since then been called the forty-niners.

Alexander immediately started to intensely feel the call of the North. He then decided to go right up into Oregon and in 1858, he reached the Valley of the Fraser River in British-Columbia, where the trumpets of the gold discovery had made themselves heard. There once again, the far too numerous crowds of dreamers in search of a sudden fortune, made him go see elsewhere. His intuition continuously guided him further up North, always further up North.

It is in Victoria where he convinces a group of Indians to take him up aboard their huge canoe. They paddled for two weeks, in the midst of the ocean, to finally draw alongside the Island of Wrangell, end of the trip. Alexander is truly welcomed into the Tribe of the Tlingits, which will soon become his second family, as he will marry the daughter of the Chief, from whom many children will be born.

In August 1861, Alexander and his spouse Georgiana, accompanied by approximately a dozen braves, left Wrangell and travelled upon the Stikine River. During the following year, Alexander Choquette was to become the first gold finder in the region; it was thirty-six hours before what would provoke the greatest gold stampede of all times.

During the years that followed, and until his death in 1898, Alexander Choquette, most commonly known as Buck, shall be from time to time prospector, discoverer, merchant and businessman without ever renouncing his foremost profession, that of a devoted dreamer. In fact, he is the one who has discovered and opened up the large Cassiar region. He also took part in the trades with the Hudsons Bay Company, but after having had a few disputes with some to the patrons, he finally opened up his own general store.

Buck Choquette was a very popular and respected person. The use of the term popular is because a friend of his, who was a journalist, often wrote with respect to his ups and downs in the British (Victoria) Colonist. It must be said that he was respected by all, amongst others because he had been smart enough to very quickly learn the Chinook lingo, the commercial language between the Indians and the Whites, which translated from the reciprocal influence of the European colonial, such as the English, the Spanish, the Portuguese, the Russian and the French. He was thus able to express his very peaceful ideas and be understood by all, as an example, with respect to the war that he personally dealt with against alcoholism, with the sole aim of keeping peace.

As the search had now progressed to such isolated areas, Buck saw the appearance of the first telegraphic wires, a system that was going to contribute to the rapid development and to the blossoming of this new part of the country. One day, thinking of doing good business, he founded a salt-works salmon establishment, the new gold, when the precious metal was becoming quite rare. True pioneer as a frontiersman, he shall come to Ottawa in 1886, aboard the very first trains that now united the country, in order to plead his case in a litigation with respect to the separation of the frontier between Canada and the United States since the Americans became the owners of the Russian Alaska.

And all of a sudden, the passing away of his wife, unfortunately followed a few years later by the death of one of his sons, truly shook up this man whose temperament was accustomed to hardship. Thanks to his courage and his phenomenal energy, when he was almost 70 years of age, he will get going again to set about what shall become his ultimate stampede. He effectively returned to the Klondike where he opened up a general store. In June of 1898, the novelist Jack London, who had asked to meet with an authentic gold seeker, was taken to the bedside of Buck Choquette, who was dying in a hospital bed in Dawson.

This stocky little man, with a bushy moustache and a fiery temperament at times, always wearing his inseparable caribou skin coat, is one of the legendary figures of the West. Having left on foot from the East, he shall come to discover and to open up the West of the new continent. He is not the only one to have moulded a part of the history of this country but he is certainly one of the most passionate persons to have done so.