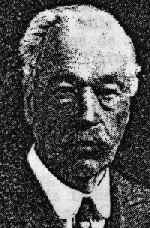 Judge Ambrose (note: his real name was Ambroise) Choquet, 97, one of the oldest jurist in America and a college classmate of Sir Wilfrid Laurier, eminent Canadian statesman, died last night at his home, 279 Liverpool avenue, where he had moved recently from Central Falls. For almost 50 years he had been a leader among Franco-Americans of the Blackstone Valley.

Surprisingly active in his advancing years, Judge Choquet became ill only four weeks ago after a strenuous walk from his downtown law offices in Providence to the State House and return. His physician ordered him to bed when it was found his heart had been overtaxed. His three children, Joseph P., Alphonse R. and Miss Marie Louise Choquet, were at his bedside when he died.

In addition to his three children, survivors include 14 grandchildren and 15 great-grandchildren. (...)

Mayor John J. Healey today ordered all flags to be flown at half-staff on all public buildings in Central Falls as a tribute to Judge Choquet. 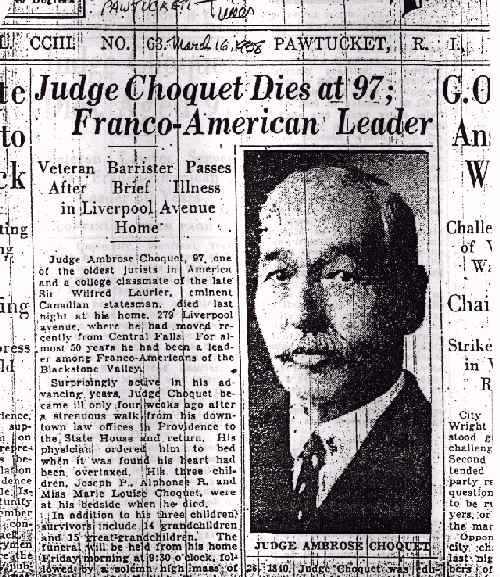 Born in Varennes, Quebec, Sept. 26, 1849, Judge Choquet was educated in parochial schools of his native town and later entered College de St. Laurent, near Montreal at the age of 15. For three years he studied law with the city solicitor of Montreal, taking a law course at the same time at McGill University, Montreal, from which he obtained a degree of B.C.L. in 1865. It was at the latter university he acquired facility in the English language.

After he had been admitted to law practice in the Province of Quebec he opened an office in Montreal where he practiced 17 years. During these years his office was across the street from that of Sir Wilfrid Laurier, a classmate at McGill, who later became the prime minister of Canada. Judge Choquet helped draft many bills for both the Legislature of Quebec and the Canadian Parliament at Ottawa.

In 1882 he removed to Rochester, N.Y., where he was associated in the practice of law with the late Alfred Ely for three years. In 1885 he temporarily abandoned the legal profession and took up editorial work for three years on newspapers in Plattsburg, N.Y., and Worcester, Mass. He gave up this work in 1888 because the editor of the Worcester newspaper wanted to support the late president Grover Cleveland for a second term while Mr. Choquet, and ardent Republican, could not reconcile himself to advocating the candidacy of a Democrat.

Resuming practice, he opened an office in Pawtucket in addition to maintaining an office in Worcester. In 1890 he removed to Central Falls and four years later became judge of probate for the town of Lincoln, which then included Central Falls. In 1889 he was appointed justice of the Eleventh District Court and the following year resigned as probate judge. For 23 years, until his retirement by the General Assembly in 1922, he presided over the District Court.

In 1926 he was elected state senator from Central Falls, serving for two years. At that time he was 87 years old and believed the oldest legislator in the United States.

Judge Choquet was founder of Club Republicain of Central Falls and its oldest member. He was a constant source of wonder to his friends and acquaintances. Until a few months ago the aged judge walked daily to his law offices in Providence and attributed his stamina and longevity to temperance and moderation in all things.